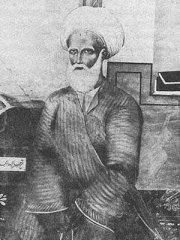 Shaykh Ahmad bin Zayn al-Dín bin Ibráhím al-Ahsá'í (Arabic: شيخ أحمد بن زين الدين بن إبراهيم الأحسائي) (1753–1826), commonly known as Shaykh Ahmad or al-Ahsá'í, was a prominent 19th-century Shia Muslim theologian and jurist who founded the influential Shaykhí school of Twelver Shiism, which attracted followers from throughout the Persian and Ottoman Empires. He was a native of the Al-Ahsa region (Eastern Arabian Peninsula), educated in Bahrain and the theological centers of Najaf and Karbala in Iraq. Spending the last twenty years of his life in Iran, he received the protection and patronage of princes of the Qajar dynasty. Read more on Wikipedia

Among religious figures, Shaykh Ahmad ranks 1,498 out of 2,238. Before him are John of Shanghai and San Francisco, Yitzhak Kaduri, Pietro Riario, Henri Schwery, Jerzy Radziwiłł, and Antony II of Constantinople. After him are Gan Ji, Franjo Šeper, Stephen Pongracz, Joseph Butler, Sigfrid of Sweden, and Mary Ward.