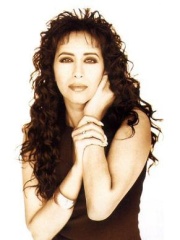 Bat-Sheva Ofra Haza-Ashkenazi, known professionally as Ofra Haza (Hebrew: עפרה חזה‎; 19 November 1957 – 23 February 2000), was an Israeli singer, actress and Grammy Award-nominated recording artist, commonly known in the Western world as "The Israeli Madonna", or "Madonna of the East". Her voice has been described as a "tender" mezzo-soprano.Of Yemenite-Jewish heritage, Haza's music is known as a mixture of traditional and commercial singing styles, fusing elements of Eastern and Western instrumentation, orchestration and dance-beat. She became successful in Europe and the Americas; during her singing career, she earned many platinum and gold discs. Read more on Wikipedia

Ofra Haza was a singer and actress from Israel. She was most famous for her song "Im Nin'alu" which became a hit in the 1980s.

Among SINGERS In Israel