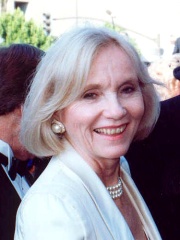 Eva Marie Saint (born July 4, 1924) is an American actress of film, theater and television. In a career spanning over 75 years, she has won an Academy Award and a Primetime Emmy Award, alongside nominations for a Golden Globe Award and two British Academy Film Awards. Upon the death of Olivia de Havilland in 2020, Saint became both the oldest living and earliest surviving Academy Award winner and one of the last surviving stars from the Golden Age of Hollywood cinema. Read more on Wikipedia

Eva Marie Saint is most famous for her role as Ingrid Bergman's character's daughter in Alfred Hitchcock's film, "North by Northwest."