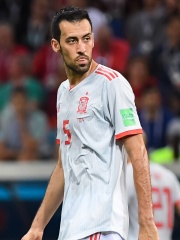 Sergio Busquets Burgos (Catalan: [busˈkɛts], Spanish: [ˈseɾxjo βusˈkets]; born 16 July 1988) is a Spanish professional footballer who plays as a defensive midfielder and captains both La Liga club Barcelona and the Spain national team. He is considered to be a deep-lying playmaker capable of directing gameplay — through short and calm passes, exceptional positioning, and his singular reading of the game — and is widely regarded as one of the best defensive midfielders of all time.A one-club man, he arrived in Barcelona's first team in July 2008. Since then he has made over 600 total appearances for the club and has won 30 trophies, including 8 La Liga titles, 7 Copa del Rey titles and 3 UEFA Champions Leagues. Read more on Wikipedia