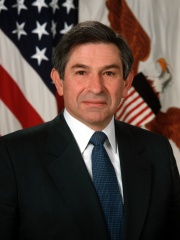 Paul Dundes Wolfowitz (born December 22, 1943) is an American political scientist and diplomat who served as the 10th President of the World Bank, U.S. Deputy Secretary of Defense, U.S. Ambassador to Indonesia, and former dean of Johns Hopkins SAIS. He is currently a visiting scholar at the American Enterprise Institute.He was an early advocate of the Iraq War and has widely been described as an architect of the war. He testified before the House Appropriations Committee in March 2003: "There is a lot of money to pay for this that doesn't have to be US taxpayer money, and it starts with the assets of the Iraqi people. We are talking about a country that can really finance its own reconstruction and relatively soon." In the aftermath of the insurgency and civil war that followed the invasion, Wolfowitz denied influencing policy on Iraq and disclaimed responsibility. Read more on Wikipedia

Among politicians, Paul Wolfowitz ranks 6,034 out of 15,710. Before him are Publius Mucius Scaevola, Lais of Corinth, Sitamun, Prince Rahotep, Emperor Montoku, and Sergio Pininfarina. After him are Henry McMahon, Antipope Benedict X, Constance of Castile, Duchess of Lancaster, Puabi, Rashid Ali al-Gaylani, and Takahashi Korekiyo.