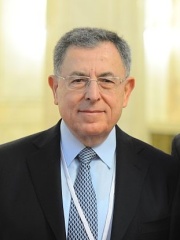 Fouad Siniora (Arabic: فؤاد السنيورة, romanized: Fu'ād as-Sanyūrah; born 19 July 1943) is a Lebanese politician, a former Prime Minister of Lebanon, a position he held from 19 July 2005 to 25 May 2008. He stepped down on 9 November 2009 in favor of Saad Hariri, the late Rafik Hariri's son. Read more on Wikipedia

Among politicians, Fouad Siniora ranks 5,264 out of 15,710. Before him are Shigechiyo Izumi, Al-Mustansir, John Dudley, 1st Duke of Northumberland, Emílio Garrastazu Médici, Louis II, Elector of Brandenburg, and Princess Wencheng. After him are Maria Anna Sophia of Saxony, Keizō Obuchi, Prince August of Saxe-Coburg and Gotha, Ivan Sratsimir of Bulgaria, George III of Georgia, and Phraates II.