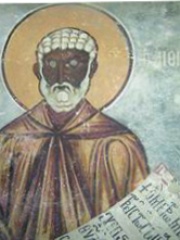 Moses the Abyssinian (Greek: Μωϋσῆς ὁ Αἰθίοψ, romanized: Mōüsês ho Aithíops, Arabic: موسى, Coptic: Ⲙⲟⲥⲉⲥ; 330 – 405), also known as Abba Moses the Robber, the Ethiopian, and the Strong, was an ascetic monk and priest in Egypt in the fourth century AD, and a notable Desert Father. He is highly venerated in both the Eastern Orthodox Church and the Oriental Orthodox Church, making him amongst the most notable Desert Fathers. According to stories about him, he converted from a life of crime to one of asceticism. Read more on Wikipedia

Page views of Moses the Blacks by language

Among religious figures, Moses the Black ranks 1,115 out of 2,238. Before him are Henry Molaison, Jesse Livermore, Giuseppe Siri, Nicholas of Japan, Pietro Gasparri, and Nilus the Younger. After him are Robert Estienne, Leonardo Sandri, Lutgardis, Maria Alexandrovna Ulyanova, Anthony Maria Zaccaria, and Begga.