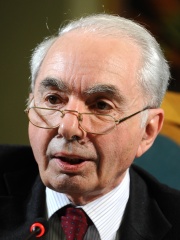 Giuliano Amato (Italian pronunciation: [dʒuˈljaːno aˈmaːto]; born 13 May 1938) is an Italian politician who twice served as Prime Minister of Italy, first from 1992 to 1993 and again from 2000 to 2001. Later, he was Vice President of the Convention on the Future of Europe that drafted the European Constitution and headed the Amato Group. He is commonly nicknamed dottor Sottile, (which means "Doctor Subtilis", the sobriquet of the Scottish Medieval philosopher John Duns Scotus, a reference to his political subtlety). Read more on Wikipedia

Since 2007, the English Wikipedia page of Giuliano Amato has received more than 127,847 page views. His biography is available in 46 different languages on Wikipedia making him the 5,548th most popular politician.

Among politicians, Giuliano Amato ranks 5,515 out of 14,801. Before him are Luigi Facta, Hermeric, Louis-François de Boufflers, Conrad, Duke of Lorraine, Arnold of Torroja, and Gulbuddin Hekmatyar. After him are Johann Trollmann, Kerbogha, Muhammad Saeed al-Sahhaf, Prince William, Duke of Cumberland, Horst Seehofer, and Prince Rahotep.