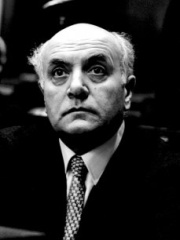 Altiero Spinelli (31 August 1907 – 23 May 1986) was an Italian communist politician, political theorist and European federalist, referred to as one of the founding fathers of the European Union. A communist and militant anti-fascist in his youth, he spent 10 years imprisoned by the Fascist regime. Having grown disillusioned with Stalinism, he broke with the Italian Communist Party in 1937. Read more on Wikipedia

Among politicians, Altiero Spinelli ranks 4,960 out of 15,577. Before him are Eannatum, Jane Avril, Mstislav II of Kiev, Albert II, Margrave of Meissen, Æthelbald, King of Wessex, and Peter Stuyvesant. After him are Michał Kleofas Ogiński, Antoine Barnave, Constanze Manziarly, Maria Christina, Princess of Transylvania, Vittorio Storaro, and Giuliano Amato.