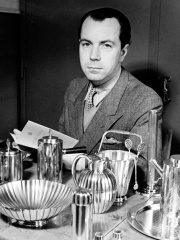 Sigvard Oscar Fredrik, Prince Bernadotte, Count of Wisborg (7 June 1907 – 4 February 2002) born as, and until 1934 known as, Prince Sigvard of Sweden, Duke of Uppland, was a member of the Swedish Royal Family and a successful industrial designer by profession. He was the second son of the future King Gustaf VI Adolf and his first wife, Princess Margaret of Connaught, eldest daughter of Prince Arthur, Duke of Connaught and Strathearn and granddaughter of Britain's Queen Victoria. He was a Prince of Sweden from birth, but was excluded from the line of succession in 1934 when he married a woman of unequal rank, a violation of provisions prohibiting marriages between a Prince and a "private man's daughter" (Swedish: enskild mans dotter), in force at the time, contained in both the 1809 Instrument of Government and the 1810 Act of Succession, and, in addition, he lost his princely and ducal titles as decided by the King in Council. Read more on Wikipedia

Among politicians, Sigvard Bernadotte ranks 4,986 out of 15,577. Before him are Janaka, Guillaume de Beaujeu, Countess Palatine Caroline of Zweibrücken, Al-Rashid of Morocco, Leonnatus, and Francis II, Duke of Lorraine. After him are Louise of France, Jayaatu Khan Tugh Temür, Li Dazhao, Authari, Conrad II of Italy, and Danilo I, Prince of Montenegro.