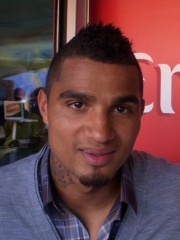 Kevin-Prince Boateng (German: [ˈkɛvɪn ˈpʁɪns boaˈtɛŋ]; born 6 March 1987), also known as Prince, is a professional footballer who plays for Serie B club Monza. A midfielder who can also play as a forward, Boateng is known for his strength, footspeed, and ball-juggling tricks. Coming through the youth system, Boateng began his career at Hertha BSC, before joining Tottenham Hotspur in England. Read more on Wikipedia

Since 2007, the English Wikipedia page of Kevin-Prince Boateng has received more than 3,830,636 page views. His biography is available in 51 different languages on Wikipedia making him the 613th most popular soccer player.