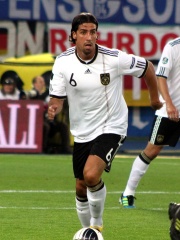 Sami Khedira (German pronunciation: [ˈsaːmiː xeˈdiːʁaː]; born 4 April 1987) is a German professional footballer who plays as a central midfielder for Serie A club Juventus and the Germany national team.He began his career at VfB Stuttgart, winning the Bundesliga in 2007, before moving to Real Madrid in 2010. In his five seasons in Spain, he won seven domestic and international trophies, including the UEFA Champions League in 2014. Read more on Wikipedia

Since 2007, the English Wikipedia page of Sami Khedira has received more than 2,463,792 page views. His biography is available in 66 different languages on Wikipedia making him the 785th most popular soccer player.