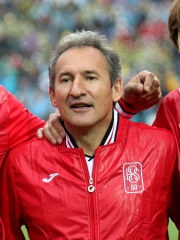 Aitor "Txiki" Begiristain Mujika (born 12 August 1964) is a Spanish former footballer who played mainly as a left winger but also as a forward, currently the director of football of English club Manchester City. He was best known for his spells at Real Sociedad and Barcelona, winning eight major titles with the latter, including four La Liga championships and the 1992 European Cup. Begiristain represented the Spain national team in one World Cup and one European Championship. Read more on Wikipedia

Since 2007, the English Wikipedia page of Txiki Begiristain has received more than 390,198 page views. His biography is available in 47 different languages on Wikipedia making him the 1,051st most popular soccer player.