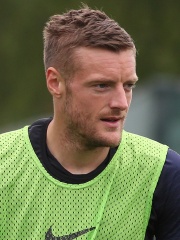 Jamie Richard Vardy (né Gill; born 11 January 1987) is an English professional footballer who plays as a striker for Premier League club Leicester City and the England national team. After being released by Sheffield Wednesday at the age of sixteen, Vardy began his senior career with Stocksbridge Park Steels, breaking into the first team in 2007 and spending three seasons there before joining Northern Premier League club FC Halifax Town in 2010. Scoring 25 goals in his debut season, he won the club's "Player's Player of the Year" award and then moved to Conference Premier club Fleetwood Town in August 2011 for an undisclosed fee. Read more on Wikipedia

Since 2007, the English Wikipedia page of Jamie Vardy has received more than 10,600,311 page views. His biography is available in 51 different languages on Wikipedia making him the 1,893rd most popular soccer player.