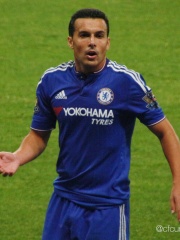 Pedro Eliezer Rodríguez Ledesma (Spanish pronunciation: [ˈpeðɾo roˈðɾiɣeθ leˈðezma]; born 28 July 1987), known as Pedro, is a Spanish professional footballer who plays as a forward or winger for Serie A club Roma. He is known for his pace, dribbling and ability to convert from counter chances. Pedro scored 99 goals in 321 appearances across all competitions for Barcelona from 2008 to 2015, before joining Chelsea in 2015 where he scored 43 goals in 206 games and helped them win the Premier League in 2017, the FA Cup in 2018 and the UEFA Europa League in 2019. Read more on Wikipedia

Page views of Pedros by language