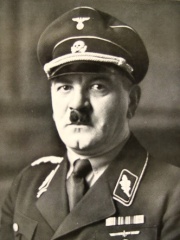 Julius Schreck (13 July 1898 – 16 May 1936) was an early senior Nazi official and close confidant of Adolf Hitler. Born in Munich, Schreck served in World War I and shortly afterwards joined right-wing paramilitary units. He joined the Nazi Party in 1920 and developed a close friendship with Adolf Hitler. Read more on Wikipedia

Julius Schreck was a Nazi SS-Obersturmbannführer (lieutenant colonel) and Adolf Hitler's personal bodyguard. He was also Heinrich Himmler's adjutant and the head of the SS combat school in Munich. Schreck was killed in action on the Eastern Front in 1943.

Among politicians, Julius Schreck ranks 2,746 out of 15,710. Before him are Albert Frederick, Duke of Prussia, Philip I, Landgrave of Hesse, Colin Powell, Taharqa, John William Friso, Prince of Orange, and Mozaffar ad-Din Shah Qajar. After him are Apepi, Mentuhotep I, Pelopidas, Eduard Limonov, Mohamed Hussein Tantawi, and Erna Solberg.