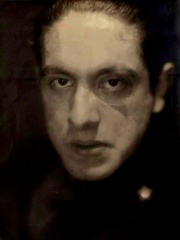 Giulio Cesare Andrea Evola (; Italian: [ˈɛːvola]; 19 May 1898 – 11 June 1974), better known as Julius Evola, was an Italian philosopher, poet, painter, antisemitic conspiracy theorist, esotericist, and occultist. He has been described as a "fascist intellectual", a "radical traditionalist", "antiegalitarian, antiliberal, antidemocratic, and antipopular", and as having been "the leading philosopher of Europe's neofascist movement".Evola is popular in fringe circles, largely because of his metaphysical, magical, and supernatural beliefs – including belief in ghosts, telepathy, and alchemy – and his traditionalism. He himself termed his philosophy "magical idealism". Read more on Wikipedia

Julius Evola was an Italian philosopher and writer who was most famous for his criticism of modernity and his advocacy of a traditionalist society.

Among philosophers, Julius Evola ranks 250 out of 1,089. Before him are Isaiah Berlin, Hans Jonas, Orosius, Apollodorus of Athens, Nicole Oresme, and Ibn al-Nafis. After him are Marsilius of Padua, Otto Weininger, Arcesilaus, Al-Ash'ari, Speusippus, and Bias of Priene.