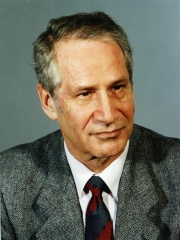 Markus Johannes Wolf (19 January 1923 – 9 November 2006), also known as Mischa, was head of the Main Directorate for Reconnaissance (Hauptverwaltung Aufklärung), the foreign intelligence division of East Germany's Ministry for State Security (Ministerium für Staatssicherheit, abbreviated MfS, commonly known as the Stasi). He was the Stasi's number two for 34 years, which spanned most of the Cold War. He is often regarded as one of the most well-known spymasters during the Cold War. Read more on Wikipedia

Markus Wolf was a high-ranking East German spy who became head of the Hauptverwaltung Aufklärung (HVA) and was responsible for the surveillance of NATO and West German intelligence operations. He was also in charge of the Stasi's foreign espionage operations.

Among public workers, Markus Wolf ranks 12 out of 15. Before him are Gaius Maecenas, Thomas Cromwell, Robert Walpole, Demetrius of Phalerum, François Guizot, and Ali Hassan al-Majid. After him are John Stuart, 3rd Earl of Bute, Pascal Lamy, and Chelsea Clinton.

Among PUBLIC WORKERS In Germany