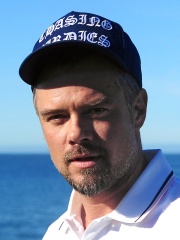 Joshua David Duhamel (; born November 14, 1972) is an American actor and former fashion model. After various modeling work, he made his acting debut as Leo du Pres on the ABC daytime soap opera All My Children and later starred as Danny McCoy on NBC's Las Vegas. Duhamel has ventured into film, appearing as one of the main protagonists in four of the Transformers films, most recently in the fifth entry, Transformers: The Last Knight (2017). Read more on Wikipedia

Since 2007, the English Wikipedia page of Josh Duhamel has received more than 8,394,089 page views. His biography is available in 112 different languages on Wikipedia making him the 1,046th most popular actor.