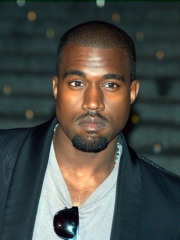 Ye ( YAY; born Kanye Omari West; June 8, 1977), commonly known as Kanye West ( KAHN-yay), is an American rapper, record producer, and fashion designer. He is widely regarded as one of the greatest and most influential hip hop musicians of all time, as well as one of the greatest musicians of his generation. Born in Atlanta and raised in Chicago, West gained recognition as a producer for Roc-A-Fella Records in the early 2000s, producing singles for several artists and developing the "chipmunk soul" sampling style. Read more on Wikipedia

Among singers, Kanye West ranks 363 out of 3,528. Before him are Anastacia, Alizée, Chris Brown, Denny Doherty, Manuel García, and Joe Lynn Turner. After him are Laura Pausini, Sabah, Giuditta Pasta, Šaban Šaulić, Selena Gomez, and Thalía.