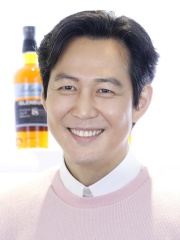 Lee Jung-jae (Korean: 이정재; born December 15, 1972) is a South Korean actor and filmmaker. Considered one of the most successful actors in South Korea, he has received various accolades, including a Primetime Emmy Award, a Screen Actors Guild Award, a Critics' Choice Television Award, six Baeksang Arts Awards, in addition to nominations for a Golden Globe Award and a Gotham Award. Aside from his acting career, Lee is also a businessman, having launched a chain of restaurants in Seoul, as well as founding several businesses including the development company Seorim C&D. He owns several of his businesses with fellow actor and close friend Jung Woo-sung.Born in Seoul, Lee debuted as a fashion model, then began his acting career on television, notably in the campus series Feelings (1994) and the drama Sandglass (1995). Read more on Wikipedia