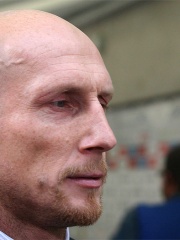 Jakob "Jaap" Stam (Dutch pronunciation: [ˈjaːp ˈstɑm]; born 17 July 1972) is a Dutch football manager, former head coach and former professional player. He is regarded as one of the best defenders of his generation.Stam played for several European clubs including PSV Eindhoven, Manchester United, Lazio, Milan and Ajax before retiring in October 2007. As well as club trophies, he won several personal awards, including being voted the best defender in the 1998–99 and 1999–2000 UEFA Champions League, as well as being included in three consecutive PFA Team of the Year sides from 1999 to 2001. Read more on Wikipedia