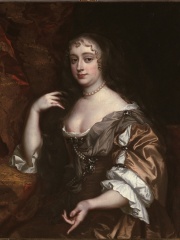 Anne Hyde (12 March 1637 – 31 March 1671) was Duchess of York and Albany as the first wife of James, Duke of York (later King James II). Anne was the daughter of a commoner – Edward Hyde (later created Earl of Clarendon) – and met her future husband when they were both living in exile in the Netherlands. She married James in 1660 and two months later gave birth to the couple's first child, who had been conceived out of wedlock. Read more on Wikipedia

Since 2007, the English Wikipedia page of Anne Hyde has received more than 475,098 page views. Her biography is available in 27 different languages on Wikipedia making her the 326th most popular companion.

Among companions, Anne Hyde ranks 328 out of 586. Before her are Merytre-Hatshepsut, Mamie Eisenhower, Gertrude of Merania, Scribonia, Clarice Orsini, and Louise of Great Britain. After her are Anne Sophie Reventlow, Princess Zorka of Montenegro, Vipsania Agrippina, Prisca, Joan of England, Queen of Sicily, and Natalia Sedova.