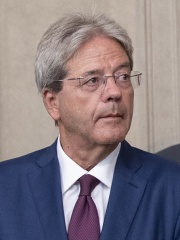 Paolo Gentiloni Silveri (Italian pronunciation: [ˈpaːolo dʒentiˈloːni]; born 22 November 1954) is an Italian politician who has served as European Commissioner for Economy in the Von der Leyen Commission since 1 December 2019. He previously served as Prime Minister of Italy from December 2016 to June 2018.After a lengthy career in local politics, Gentiloni was elected to the Chamber of Deputies in 2001. He served in the Cabinet under Romano Prodi as Minister of Communications from 2006 to 2008. Read more on Wikipedia

Paolo Gentiloni is the current Prime Minister of Italy. He was sworn in on December 12, 2016 after Matteo Renzi resigned.

Among politicians, Paolo Gentiloni ranks 4,013 out of 15,710. Before him are Roman the Great, Robert I, Count of Flanders, Duke Henry of Mecklenburg-Schwerin, William, Duke of Nassau, Jiroemon Kimura, and Haitham bin Tariq. After him are Johann I Joseph, Prince of Liechtenstein, Birger, King of Sweden, Simonetta Sommaruga, Rudy Giuliani, Hadım Suleiman Pasha, and Juan, Count of Montizón.