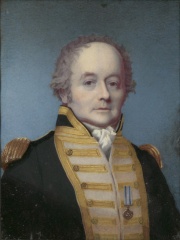 Vice-Admiral William Bligh (9 September 1754 – 7 December 1817) was an officer of the Royal Navy and a colonial administrator. The Mutiny on the Bounty occurred during his command of HMS Bounty in 1789; after being set adrift in Bounty's launch by the mutineers, Bligh and his loyal men all reached Timor alive, after a journey of 3,618 nautical miles (6,700 km; 4,160 mi). Seventeen years after the Bounty mutiny, on 13 August 1806, he was appointed Governor of New South Wales in Australia, with orders to clean up the corrupt rum trade of the New South Wales Corps. Read more on Wikipedia

Since 2007, the English Wikipedia page of William Bligh has received more than 1,362,904 page views. His biography is available in 32 different languages on Wikipedia making him the 384th most popular military personnel.