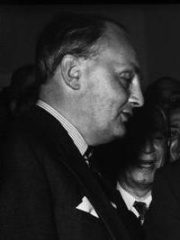 Hubert Miles Gladwyn Jebb, 1st Baron Gladwyn (25 April 1900 – 24 October 1996), was a prominent British civil servant, diplomat and politician as well as the Acting Secretary-General of the United Nations for a little over three months. Read more on Wikipedia

Gladwyn Jebb was a British diplomat who was the secretary-general of the United Nations Conference on Trade and Development. He is most famous for his role in the development of the Marshall Plan, which helped rebuild Europe after World War II.

Among politicians, Gladwyn Jebb ranks 2,572 out of 15,710. Before him are Piye, Thaksin Shinawatra, Eleanor of Toledo, Amalie Auguste of Bavaria, Alfred Hugenberg, and Konstantinos Karamanlis. After him are Jacob Zuma, Antipater the Idumaean, Sverker I of Sweden, Natalya Naryshkina, Antonio José de Sucre, and Julia Maesa.