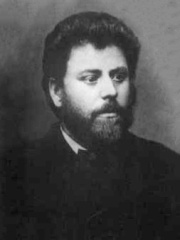 Ion Creangă ({{IPA-ro|iˈon ˈkre̯aŋɡə}; March 1, 1837 – December 31, 1889) was a Romanian writer, raconteur and schoolteacher. A main figure in 19th century Romanian literature, he is best known for his Childhood Memories volume, his novellas and short stories, and his many anecdotes. Creangă's main contribution to fantasy and children's literature includes narratives structured around eponymous protagonists ("Harap Alb", "Ivan Turbincă", "Dănilă Prepeleac", "Stan Pățitul"), as well as fairy tales indebted to conventional forms ("The Story of the Pig", "The Goat and Her Three Kids", "The Mother with Three Daughters-in-Law", "The Old Man's Daughter and the Old Woman's Daughter"). Read more on Wikipedia

Since 2007, the English Wikipedia page of Ion Creangă has received more than 179,911 page views. His biography is available in 27 different languages on Wikipedia making him the 1,633rd most popular writer.

Among writers, Ion Creangă ranks 1,631 out of 4,883. Before him are Attila József, Upton Sinclair, Mahadevi Varma, Jón Arason, Margit Sandemo, and Jonas Lie. After him are Martin of Opava, Thomas Merton, Paul Gerhardt, Wayne Dyer, Miguel Hernández, and James B. Donovan.