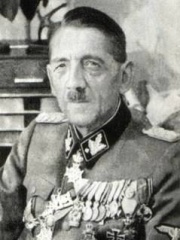 Artur Gustav Martin Phleps (29 November 1881 – 21 September 1944) was an Austro-Hungarian, Romanian and German army officer who held the rank of SS-Obergruppenführer und General der Waffen-SS (lieutenant general) in the Waffen-SS during World War II. At the post-war Nuremberg trials, the Waffen-SS – of which Phleps was a senior officer – was declared to be a criminal organisation due to its major involvement in war crimes and crimes against humanity. An Austro-Hungarian Army officer before and during World War I, he specialised in mountain warfare and logistics, and had been promoted to Oberstleutnant (lieutenant colonel) by the end of the war. During the interwar period he joined the Romanian Army, reaching the rank of General-locotenent (major general), and also became an adviser to King Carol. Read more on Wikipedia

Among MILITARY PERSONNELS In Romania