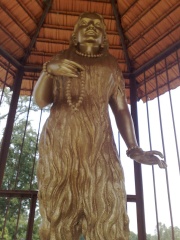 Akka Mahadevi ಅಕ್ಕ ಮಹಾದೇವಿ (c.1130–1160) was one of the early female poets of the Kannada literature and a prominent person in the Lingayat Shaiva sect in the 12th century. Her 430 extant Vachana poems (a form of spontaneous mystical poems), and the two short writings called Mantrogopya and the Yogangatrividhi are considered her most notable contribution to Kannada literature. She composed fewer poems than other saints of the movement. Read more on Wikipedia

Among people born in 1130, Akka Mahadevi ranks 12. Before her are Toghrul, Géza II of Hungary, Benjamin of Tudela, Charles VII of Sweden, Rashid ad-Din Sinan, and Magnus II of Sweden. After her are Theobald V, Count of Blois, Eustace IV, Count of Boulogne, Euphrosyne of Kiev, Saint Meinhard, Kirill of Turov, and Constantine Manasses. Among people deceased in 1101, Akka Mahadevi ranks 11. Before her are Su Shi, Hugh, Count of Vermandois, Su Song, Conrad II of Italy, Welf I, Duke of Bavaria, and Urraca of Zamora. After her are Emperor Daozong of Liao, Vseslav of Polotsk, Ida of Formbach-Ratelnberg, and Al-Musta'li.