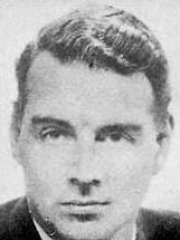 Guy Francis de Moncy Burgess (16 April 1911 – 30 August 1963) was a British diplomat and Soviet agent, a member of the Cambridge Five spy ring that operated from the mid-1930s to the early years of the Cold War era. His defection in 1951 to the Soviet Union, with his fellow spy Donald Maclean, led to a serious breach in Anglo-United States intelligence co-operation, and caused long-lasting disruption and demoralisation in Britain's foreign and diplomatic services. Born into a wealthy middle-class family, Burgess was educated at Eton College, the Royal Naval College, Dartmouth and Trinity College, Cambridge. Read more on Wikipedia

Since 2007, the English Wikipedia page of Guy Burgess has received more than 963,118 page views. His biography is available in 15 different languages on Wikipedia making him the 142nd most popular extremist.