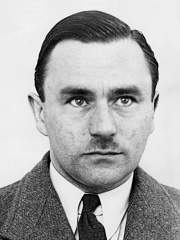 John George Haigh (; 24 July 1909 – 10 August 1949), commonly known as the Acid Bath Murderer, was an English serial killer who was convicted for the murders of six people, although he claimed to have killed nine. Haigh battered to death or shot his victims and disposed of their bodies using sulphuric acid before forging their signatures so he could sell their possessions and collect large sums of money. Read more on Wikipedia

Since 2007, the English Wikipedia page of John Haigh has received more than 319,626 page views. His biography is available in 16 different languages on Wikipedia making him the 136th most popular extremist.