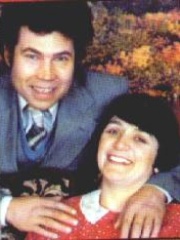 Frederick Walter Stephen West (29 September 1941 – 1 January 1995) was an English serial killer who committed at least 12 murders between 1967 and 1987 in Gloucestershire, the majority with his second wife, Rosemary West. All the victims were young women. At least eight of these murders involved the Wests' sexual gratification and included rape, bondage, torture and mutilation; the victims' dismembered bodies were typically buried in the cellar or garden of the Wests' Cromwell Street home in Gloucester, which became known as the "House of Horrors". Read more on Wikipedia

Since 2007, the English Wikipedia page of Fred West has received more than 5,343,776 page views. His biography is available in 15 different languages on Wikipedia making him the 157th most popular extremist.