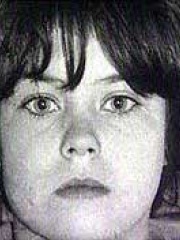 Mary Flora Bell (born 26 May 1957) is an English woman who, as a child aged 10–11 in 1968, strangled two young boys to death in Scotswood, a district in the West End of Newcastle upon Tyne. She was convicted in December 1968 of the manslaughter of Martin Brown (aged 4) and Brian Howe (aged 3).Since her release from prison in 1980, she has lived under a series of pseudonyms. Her identity has been protected by a court order, which has also been extended to protect the identity of her daughter. Read more on Wikipedia

Since 2007, the English Wikipedia page of Mary Bell has received more than 3,083,483 page views. Her biography is available in 18 different languages on Wikipedia making her the 110th most popular extremist.