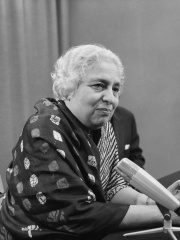 Vijaya Lakshmi Pandit (née Swarup Nehru; 18 August 1900 – 1 December 1990) was an Indian diplomat and politician who was the 6th Governor of Maharashtra from 1962 to 1964 and 8th President of the United Nations General Assembly from 1953 to 1954, the first woman appointed to either post. Hailing from a prominent political family, her brother Jawaharlal Nehru was the first Prime Minister of independent India, her niece Indira Gandhi the first female Prime Minister of India and her grand-nephew Rajiv Gandhi was the sixth Prime Minister of India. Pandit was sent to London as India's most important diplomat after serving as india's envoy to the Soviet Union, the United States and the United Nations. Read more on Wikipedia

Among politicians, Vijaya Lakshmi Pandit ranks 8,861 out of 15,577. Before her are William of Champlitte, Jan Fischer, Domenico I Contarini, Joan, Countess of Toulouse, Christoph, Duke of Württemberg, and Jose P. Laurel. After her are Aureolus of Aragon, Kormesiy, Alain I of Albret, Francisco de Sá Carneiro, Roger de Moulins, and Fakhr al-Din II.