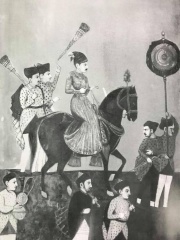 Rajaram Bhosle I (14 February 1670 – 3 March 1700) was the third Chhatrapati of Maratha Empire, who ruled from 1689 to his death in 1700. He was the second son of the Shivaji, the founder of the empire and younger half-brother of Sambhaji, who he succeeded. His eleven-year reign was marked with a constant struggle against the Mughals. Read more on Wikipedia

Since 2007, the English Wikipedia page of Rajaram I has received more than 741,320 page views. His biography is available in 17 different languages on Wikipedia. Rajaram I is the 7,709th most popular politician, the 222nd most popular biography from India and the 70th most popular Indian Politician.

Page views of Rajaram IS by language

Among politicians, Rajaram I ranks 7,709 out of 15,710. Before him are Decimus Junius Brutus Callaicus, Louis of Nassau, Willy Claes, Vlastimir, Baldomero Espartero, and Zu Ding. After him are Kamehameha III, Rangjung Rigpe Dorje, 16th Karmapa, Frederick, Hereditary Prince of Baden-Durlach, Eustace IV, Count of Boulogne, Manuel III of Trebizond, and Erik Scavenius.

Among people born in 1670, Rajaram I ranks 11. Before him are Countess Palatine Dorothea Sophie of Neuburg, Giovanni Bononcini, James FitzJames, 1st Duke of Berwick, John Toland, Danilo I, Metropolitan of Cetinje, and Jean-Baptiste Dubos. After him are Gustav, Duke of Zweibrücken, Zheng Keshuang, Maria Margaretha Kirch, Domenico Trezzini, Turlough O'Carolan, and Olof Celsius. Among people deceased in 1700, Rajaram I ranks 9. Before him are André Le Nôtre, John Dryden, Do-Aklin, Monsieur de Sainte-Colombe, Lagâri Hasan Çelebi, and Prince William, Duke of Gloucester. After him is Louis Jolliet.