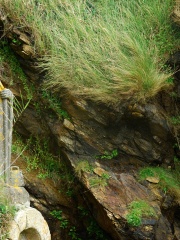 Gildas (Breton: Gweltaz; c. 500 – c. 570) — also known as Gildas the Wise or Gildas Sapiens — was a 6th-century British monk best known for his scathing religious polemic De Excidio et Conquestu Britanniae, which recounts the history of the Britons before and during the coming of the Saxons. Read more on Wikipedia

Since 2007, the English Wikipedia page of Gildas has received more than 352,440 page views. His biography is available in 29 different languages on Wikipedia. Gildas is the 1,177th most popular religious figure (down from 1,090th in 2019), the 1,419th most popular biography from United Kingdom (down from 1,301st in 2019) and the 33rd most popular British Religious Figure.

Page views of Gildas by language

Among religious figures, Gildas ranks 1,177 out of 2,272. Before him are Anthony Mary Claret, Tola, Mohammad-Baqer Majlesi, Ivo of Chartres, Giovanni Benelli, and Isma'il ibn Ja'far. After him are Oda Nobutada, Abiathar, Cassian of Imola, Jakob Ammann, Keith O'Brien, and Augustin Bea.

Among people born in 500, Gildas ranks 25. Before him are Hesychius of Alexandria, Rhadamistus, Theudigisel, Rechiar, Wacho, and Euphemia. After him are Sigobert the Lame, Godomar II, Kaleb of Axum, Ælle of Sussex, Theodoric Strabo, and Agathangelos. Among people deceased in 570, Gildas ranks 4. Before him are Abdullah ibn Abd al-Muttalib, John Philoponus, and Olympiodorus the Younger. After him are Aregund and Waldrada.