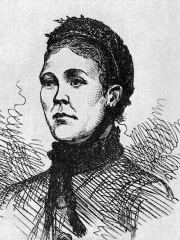 Catherine Eddowes (14 April 1842 – 30 September 1888) is the fourth of the canonical five victims of the notorious unidentified serial killer known as Jack the Ripper, who is believed to have killed and mutilated a minimum of five women in the Whitechapel and Spitalfields districts of London from late August to early November 1888. Eddowes was the second person murdered in the early hours of Sunday 30 September; a night which already had seen the murder of Elizabeth Stride less than an hour earlier. These two murders are commonly referred to as the "double event".Part of a left kidney was later sent to the leader of the Whitechapel Vigilance Committee accompanied by a letter addressed From Hell. Read more on Wikipedia

Since 2007, the English Wikipedia page of Catherine Eddowes has received more than 748,936 page views. Her biography is available in 18 different languages on Wikipedia making her the 1,117th most popular religious figure.

Among religious figures, Catherine Eddowes ranks 1,115 out of 2,001. Before her are Anatolius of Constantinople, Jānis Pujats, Josyf Slipyj, Eulogius of Córdoba, Theodosius of Kiev, and Jaime Lucas Ortega y Alamino. After her are Isidore of Pelusium, Keith O'Brien, Adrian and Natalia of Nicomedia, Antipope Theodoric, Giuseppe Siri, and Daniele Comboni.