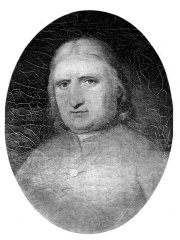 George Fox (July 1624 – 13 January 1691) was an English Dissenter, who was a founder of the Religious Society of Friends, commonly known as the Quakers or Friends. The son of a Leicestershire weaver, he lived in times of social upheaval and war. He rebelled against the religious and political authorities by proposing an unusual, uncompromising approach to the Christian faith. Read more on Wikipedia

George Fox was an English Christian minister who founded the Religious Society of Friends, commonly known as the Quakers. He is most famous for his role in the English Civil War and the foundation of Quakerism.

Among religious figures, George Fox ranks 855 out of 2,272. Before him are Eleazar, Arnulf of Metz, Diego de Landa, Simeon of Jerusalem, Antipope Christopher, and John of Rila. After him are Antipope Innocent III, Antipope Victor IV, John Eudes, Pierre Cauchon, Theodore of Mopsuestia, and Jane Frances de Chantal.