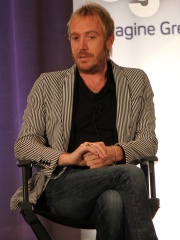 Rhys Ifans (Welsh pronunciation: [r̥ɨːs ˈivans]; born Rhys Owain Evans; 22 July 1967) is a Welsh actor and musician. He was the frontman of Welsh rock music bands the Peth and Super Furry Animals. As an actor, he is best known for his roles in Notting Hill (1999), Kevin & Perry Go Large (2000) and Enduring Love (2004) as well as his portrayals of Xenophilius Lovegood in Harry Potter and the Deathly Hallows – Part 1 (2010), the supervillain Lizard in Marc Webb's The Amazing Spider-Man (2012) and the Marvel Cinematic Universe film Spider-Man: No Way Home (2021), and Grigori Rasputin in The King's Man (2021). Read more on Wikipedia