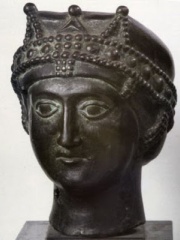 Euphemia (died 520s), whose original name was Lupicina, was an Empress of the Byzantine Empire by marriage to Justin I. Empress Euphemia is credited with the ecclesiastical policies of Justin and she founded a Church of Saint Euphemia, where she was buried following her death, probably in either 523 or 524. Read more on Wikipedia

Page views of Euphemias by language

Among politicians, Euphemia ranks 6,061 out of 15,710. Before her are William Ernest, Grand Duke of Saxe-Weimar-Eisenach, Welf I, Duke of Bavaria, Zalmoxis, Tôn Đức Thắng, Wellington Koo, and Rifaat al-Assad. After her are Yuri II of Vladimir, Girolamo Riario, Julia Gillard, Julia the Younger, Jizi, and Agis I.

Among people born in 500, Euphemia ranks 24. Before her are Hormizd III, Hesychius of Alexandria, Rhadamistus, Theudigisel, Rechiar, and Wacho. After her are Gildas, Sigobert the Lame, Godomar II, Kaleb of Axum, Ælle of Sussex, and Theodoric Strabo. Among people deceased in 523, Euphemia ranks 4. Before her are Pope Hormisdas, Thrasamund, and Dhu Nuwas. After her is Ammonius Hermiae.