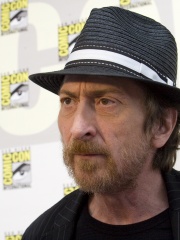 Frank Miller (born January 27, 1957) is an American comic book writer, penciller and inker, novelist, screenwriter, film director, and producer known for his comic book stories and graphic novels such as his run on Daredevil, for which he created the character Elektra, and subsequent Daredevil: Born Again, The Dark Knight Returns, Batman: Year One, Sin City, and 300. Miller is noted for combining film noir and manga influences in his comic art creations. "I realized when I started Sin City that I found American and English comics be too wordy, too constipated, and Japanese comics to be too empty. Read more on Wikipedia