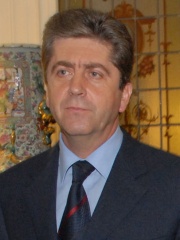 Georgi Sedefchov Parvanov (Bulgarian: Георги Седефчов Първанов, IPA: [ɡɛˈɔrɡi pɐrˈvanof]) (born 28 June 1957) is a Bulgarian historian and politician who was President of Bulgaria from 2002 to 2012. He was elected after defeating incumbent Petar Stoyanov in the second round of the November 2001 presidential election. He took office on 22 January 2002. Read more on Wikipedia

Among politicians, Georgi Parvanov ranks 7,933 out of 15,577. Before him are Demetrios I Kantakouzenos, Fabia Eudokia, William II, Count of Flanders, Artuk Bey, Christian August II, Duke of Schleswig-Holstein-Sonderburg-Augustenburg, and Theodoric I, Duke of Upper Lorraine. After him are André Tardieu, Leopold IV, Duke of Anhalt, K. Kamaraj, Bohemond VII of Antioch, Lucius Cornelius Scipio Barbatus, and Owain Glyndŵr.