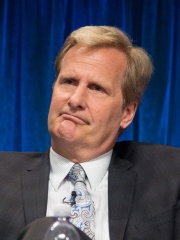 Jeffrey Warren Daniels (born February 19, 1955) is an American actor, musician, and playwright. Known for his work in television, film, and multiple stage productions, he is the recipient of various accolades, including two Primetime Emmy Awards, in addition to nominations for three Tony Awards, five Screen Actors Guild Awards, and five Golden Globe Awards. He made his film debut in Miloš Forman's drama Ragtime (1981), and continued to work regularly throughout the 1980s to 1990s in James L. Brooks' Terms of Endearment (1983), Woody Allen's The Purple Rose of Cairo (1985), Mike Nichols' Heartburn (1986) as well as the war epic Gettysburg (1993) and the action film Speed (1994). Read more on Wikipedia