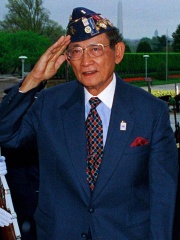 Fidel Valdez Ramos (Spanish: [fiˈðel βalˈdes ra.mos]: born Fidel Ramos y Valdez; March 18, 1928), popularly known as FVR and Eddie, is a retired Filipino general and politician who served as the 12th President of the Philippines from 1992 to 1998. During his six years in office, Ramos was widely credited and admired by many for revitalizing and renewing international confidence in the Philippine economy. Read more on Wikipedia

Since 2007, the English Wikipedia page of Fidel Ramos has received more than 689,455 page views. His biography is available in 52 different languages on Wikipedia making him the 4,986th most popular politician.

Among politicians, Fidel Ramos ranks 4,958 out of 14,801. Before him are Mohammad Hatta, Bernard of Saxe-Weimar, Mithridates II of Parthia, Quintus Mucius Scaevola Pontifex, Erwig, and Maria Theresa of Austria-Este. After him are Derviş Eroğlu, Yao Wenyuan, John Bowring, Lucius Antonius Saturninus, Inukai Tsuyoshi, and Psusennes II.