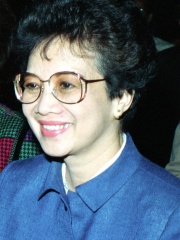 Maria Corazon "Cory" Sumulong Cojuangco Aquino (Tagalog: [koɾaˈson koˈhwaŋko aˈkino], 25 January 1933 – 1 August 2009) was a Filipina politician who served as the 11th president of the Philippines from 1986 to 1992. She was the most prominent figure of the 1986 People Power Revolution, which ended the two-decade rule of President Ferdinand Marcos and led to the establishment of the current democratic Fifth Philippine Republic. Corazon Aquino was married to Senator Benigno Aquino Jr., who was one of the most prominent critics of President Marcos. Read more on Wikipedia

Corazon Aquino is most famous for being the first female president of the Philippines. She became president after the assassination of her husband, President Benigno Aquino, Jr. She was president from 1986-1992.

Among politicians, Corazon Aquino ranks 1,714 out of 15,710. Before her are Chilperic II, Rudolf IV, Duke of Austria, Attalus I, Theuderic I, Horik I, and Bernhard von Bülow. After her are Duchess Sophie Charlotte in Bavaria, Suleyman Shah, Symon Petliura, Bona Sforza, Theuderic IV, and Tipu Sultan.