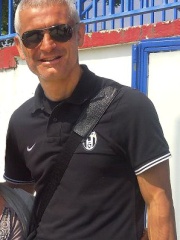 Fabrizio Ravanelli (Italian pronunciation: [faˈbrittsjo ravaˈnɛlli]; born 11 December 1968) is an Italian football manager and former international player. A former striker, Ravanelli started and ended his playing career at hometown club Perugia Calcio, and also played for Middlesbrough, Juventus and Marseille. He won five titles with Juventus, including a Serie A championship in 1995 and a Champions League title in 1996 where he scored in the final. Read more on Wikipedia

Since 2007, the English Wikipedia page of Fabrizio Ravanelli has received more than 660,777 page views. His biography is available in 30 different languages on Wikipedia making him the 103rd most popular coach.