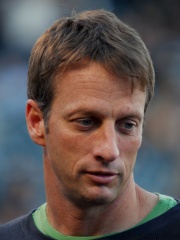 Anthony Frank Hawk (born May 12, 1968), nicknamed Birdman, is an American professional skateboarder, entrepreneur, and the owner of the skateboard company Birdhouse. Hawk completed the first documented "900" skateboarding trick, licensed a video game series published by Activision, and is a pioneer of modern vertical skateboarding.In 2002, he created the "Boom Boom HuckJam", an extreme sports exhibition and tour that was launched in Las Vegas. Hawk has appeared in films, other media, and his own series of video games. Read more on Wikipedia

Since 2007, the English Wikipedia page of Tony Hawk has received more than 5,287,436 page views. His biography is available in 38 different languages on Wikipedia making him the 22nd most popular skater.

Among SKATERS In United States