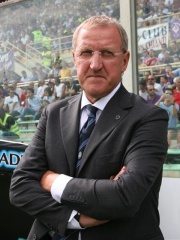 Luigi Delneri (born 23 August 1950), often incorrectly written as Del Neri, is an Italian football manager and a former player. After a playing career as a midfielder including for several Serie A clubs, he began managing in the lower leagues, and took Ternana to consecutive promotions into Serie B. He then spent four years at Chievo, helping the Verona neighbourhood club into Serie A for the first time and 5th place and UEFA Cup qualification in their first season at the top. Delneri left Chievo in 2004 for UEFA Champions League holders Porto, but was dismissed within weeks and before a competitive game. Read more on Wikipedia