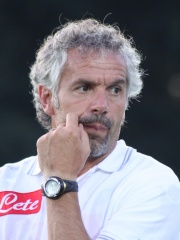 Roberto Donadoni (Italian pronunciation: [roˈbɛrto donaˈdoːni]; born 9 September 1963) is an Italian football manager and former midfielder. A complete, versatile and hard-working winger, known for his pace, stamina, offensive capabilities, distribution and technical skills, Donadoni was capable of playing on either flank, or even in the centre. Donadoni began his career with Atalanta, and he later became a pillar of the powerhouse Milan team of the late 1980s and early '90s, achieving notable domestic and international success during his time with the club. Read more on Wikipedia

Since 2007, the English Wikipedia page of Roberto Donadoni has received more than 423,574 page views. His biography is available in 39 different languages on Wikipedia making him the 78th most popular coach.