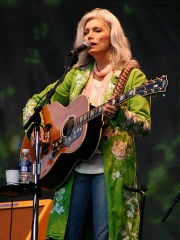 Emmylou Harris (born April 2, 1947) is an American singer, songwriter and musician. She has released dozens of albums and singles over the course of her career and has won 14 Grammys, the Polar Music Prize, and numerous other honors, including becoming a member of the Grand Ole Opry in 1992 and an induction into the Country Music Hall of Fame in 2008. In 2018, she was presented the Grammy Lifetime Achievement Award.Harris' work and recordings include work as a solo artist, a bandleader, an interpreter of other composers' works, a singer-songwriter, and a backing vocalist and duet partner. Read more on Wikipedia